The Minnesota press has been awash lately in clean energy story coverage. (It helps when Governor Walz makes big clean energy announcements like this one). There’s a lot to discuss, with both the Minnesota House and Senate reviewing a flurry of bills relating to big overarching clean energy goals as well as smaller more technical legislation relating to community solar gardens, energy storage, and EV charging stations.

But we understand not everyone has time to read every article, and digest every new report. We break down the five biggest takeaways from the just released Minnesota State Energy Factsheet, and how the clean energy community can leverage the new data.

Electricity demand ticked up slightly just 0.2% in Minnesota last year, while while electricity demand nationwide rose 2.2% in 2018. The increased national demand is attributed to faster economic growth and extreme weather conditions throughout the year that prompted greater use of air conditioning than in 2017​.​

4. The American Council for an Energy-Efficient Economy (ACEEE) ranked Minnesota 8th out of all 50 states, the highest ranking in the Midwest, for its overall energy efficiency programs (up from a rank of 9th last year).

Minnesota has long prized energy efficiency through the implementation of statewide policies like Minnesota’s Energy Efficiency Resource Standard. This policy created an energy savings target for utilities and has saved ratepayers billions of dollars by using energy more efficiently and avoiding the need for new power plants to be built. By continuously increasing our already high ranking, it’s nice to see Minnesota is leading the rest of the nation on efficiency policy.

Many businesses cite that sustainability is being built into their business growth strategy, illustrating how the two can go hand-in-hand. According to PV Magazine, American corporations last year purchased close to 5 GW of renewable energy, and the article states that, “ Where there are big data centers there is a need for energy. And, where there is a need for energy, corporations are proving day in and day out that they’ll choose renewable.” 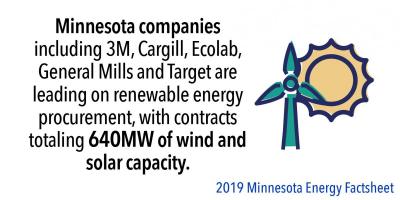 The Minnesota State Energy Factsheet is a companion to the Sustainable Energy in America Factbook, compiled by research firm BloombergNEF for the Business Council for Sustainable Energy (BCSE). The Factbook outlines key trends influencing national and state investment and economics, energy supply, and energy demand.