Clay Norrbom tells us all about their groundbreaking wind + biofuels project in Albert Lea, MN

This interview has been edited for length and clarity.

Q: Tell us about yourself and what you do at Juhl?

A: Clay D. Norrbom, Managing Director, Juhl Clean Energy Assets, Inc. I joined Juhl about five years ago, but have known and worked with the Juhl team for about 10 years. I’m based in Wisconsin – I’m the small town farm person from Northern Wisconsin who worked on Wall Street for about 10 years and came back to renewable energy to clean my slate from my sins on Wall Street. I’m the third leg of the leadership/ownership team of the company. I run the part of our business that deals with projects we own ourselves. I work with our corporate partners to develop and maintain relationships as we tend to do a lot of repeat business with them.

Q: Tell us about the Renewable Energy Group (REG) project in Albert Lea.

A: For the past three years, maybe longer, we’ve been working with REG on a corporate level to identify where there are opportunities to build onsite renewable energy projects at their biodiesel production facilities. We are finding the best ways to lower their carbon intensity in a meaningful way at these plants. Through this process, we identified the Albert Lea plant as the best place to start because we could do near-site wind energy to help with their carbon scoring. Carbon scoring is an intense look at the whole lifecycle of the fuel, so every percentage of carbon you can remove from the process has a direct impact on profitability. 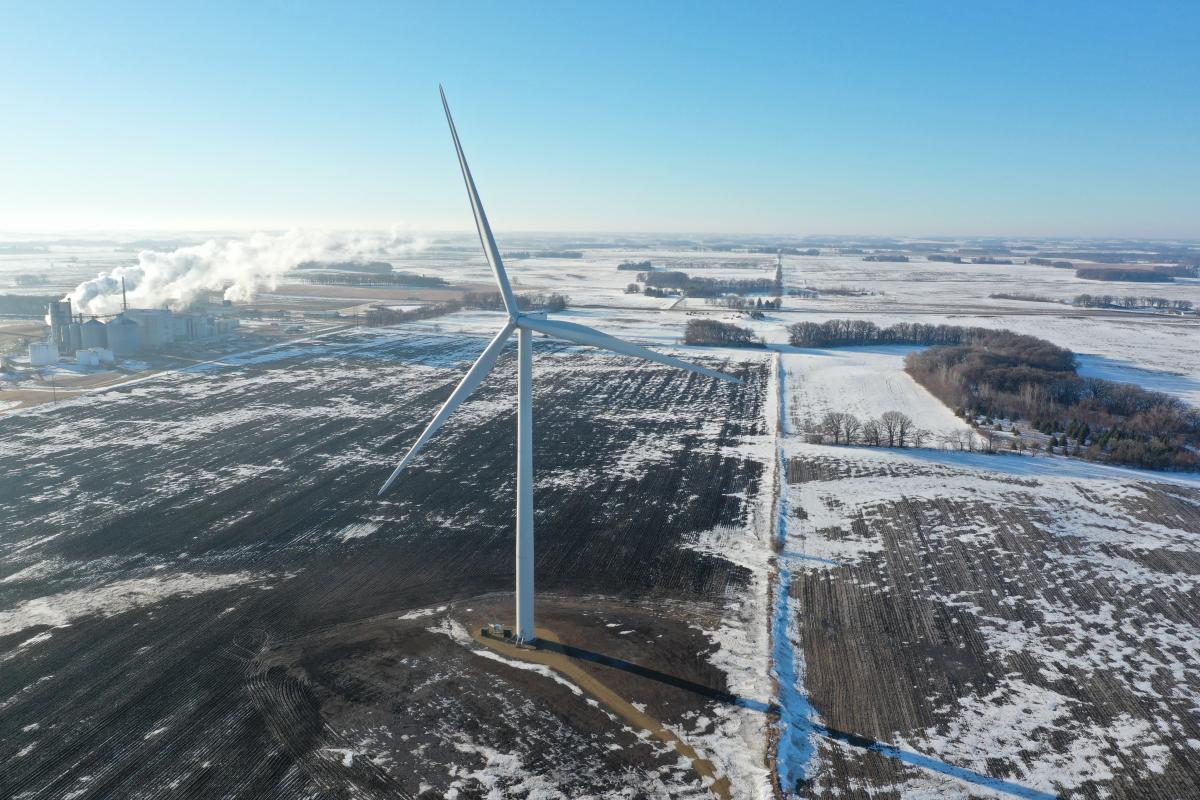 Q: Tell us about the wind turbine that was built for REG.

A: We completed work in December on a single, General Electric 2.5 MW wind turbine that produces roughly 10,000 MW hours a year. These turbines are typically deployed in large wind farms and we are one of the few customers who deploy them one or two at a time. On a net basis, this wind turbine meets the plant’s annual energy usage. The turbine will save approximately 68,000 tons of carbon dioxide over the first 10 years, displacing predominantly fossil fuel-based electricity. This is the equivalent of greenhouse gas emissions from 168 million miles driven by an average passenger vehicle.

Q: What makes this project unique?

A: Because of the strict calculations about the carbon impact from biofuels, the wind turbine has to be directly connected to the plant, offsetting energy usage with renewable energy. The plant cannot simply purchase renewable energy credits, the offset must be direct, which makes the project more of a challenge.

The wind turbine is the first of its kind in the US where a biodiesel facility is being supplied renewable electricity directly from a wind turbine. The project further reduces the REG Albert Lea facility’s carbon intensity which is in line with REG’s goal to drive to a more sustainable future.

This wind turbine, along with other aspects of the plant, makes this one of the lowest carbon biodiesel facilities in the country. If diesel fuel scores 100 for carbon impact — this is in the low 30s, making it one-third of the carbon of burning regular diesel fuel – which is quite meaningful.

A: This is the second project with a biofuel company where we have helped them directly connect renewables. It is hard to do these direct-connected projects and companies need us to keep working out how to get closer to zero net-carbon and they have a way to monetize that and make it worth the effort to get there. We’ve always been about distributed generation but the industry is driving us to go lower and lower and if we do it right, the amplifier effect is huge. The marrying of our work on renewables and the biofuels plants needs for local renewables is exciting – it hasn’t always been that way.

Q: Juhl Energy has worked on several unique single-turbine projects including the pioneering solar + storage project in Detroit Lakes. Why is Juhl invested in these kinds of projects?

A: From a technical perspective, we fundamentally believe that the grid needs these distributed solutions. Juhl has come to occupy this place in the middle — between traditional large utility-scale projects and solar-powered homes. We believe the grid needs to settle somewhere in between, around the local substation. How can we build more renewables around the local substation that isn’t dependent on transmission, how can we work with small co-ops to find a balance and how can we make it cleaner at this level and build resiliency and save you money with a local grid as well?

If you can settle on the middle ground, there is also a way we can distribute more dollars out of that. We believe that the economics that come of it should be more widely distributed as well. We like to work with the local communities and co-ops and municipalities to find a win/win. As an example, we opened the Albert Lea project to more people who wanted to invest in these types of projects so the dollars go to more owners.

Q: Please explain the significance of this project in terms of how Minnesota is building a clean energy economy?

A: Minnesota has a real opportunity as the renewable side works with the bio side – we can make the biofuel industry a lot lower carbon and meet the national standards for how that is calculated. We can be at the forefront as more and more biofuel and ethanol producers are going lower or no carbon.

Here, the REG facility is served by Freeborn-Mower Electric Co-op – another example of where we can go in and work with the co-op instead of cutting them out. We need to continue to work with rural co-ops to build renewable energy within their own distribution networks instead of buying from bigger facilities. That way, more dollars stay in the co-op territory and benefit all members with cleaner and lower electricity costs.

There is a lot of room to run in Minnesota still. If we look to 2050 is the grid going to be cleaner? More or less concentrated? Who will own it? More or less people? I think it is just as possible that the clean energy grid is owned by fewer people than the old grid was owned. If we build a whole new grid and make it clean, let’s break up the economics as well so it spreads more wealth.