Legislative Update: Session is Over; Where Everything Stands

After a contentious three month legislative session, with long hours logged by those working in and for clean energy, the end of session came with a large question mark hanging over the work.
Legislative Session Recap Minnesota Legislature Policy Updates 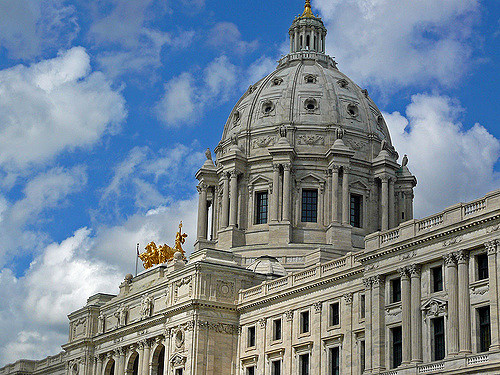 After a contentious three month legislative session, with long hours logged by those working in and for clean energy, the end of session came with a large question mark hanging over the work.

Governor Dayton has 14 days to make a decision whether or not to sign the legislation passed to his desk upon the conclusion of session. For clean energy businesses — you’ll want to watch what he does with the supplemental budget bill — a large bill that includes spending on every single budget area from health and human services, to agriculture to energy.

What you can do:

If there’s something  in the budget bill that you really want or don’t want passed into law — call the Governor’s office and make your voice heard. You can reach his office in the following ways:

Status of policies CEEM worked on this session:

STATUS: Passed in a stand alone bill, likely to get signed by Governor.

Energy Storage: This bill appropriates $150,000 for a study to examine the costs and benefits of energy storage statewide. The bill also requires utilities to include energy storage in their integrated resource planning (IRP) process at the Minnesota Public Utilities Commision (PUC), and incentivizes investor-owned utilities to develop energy storage pilot projects.

STATUS: Included in the Supplemental Budget Bill; faces a potential veto from Governor.

Residential Biomass Heating Grant Program: Changed from a tax credit to a grant program earlier this session, this bill was developed to encourage the purchase and installation of high-efficiency biomass heating appliances. This bill would have helped Minnesota companies who manufacture these appliances, and Minnesotans by offering them an incentive to purchase the appliance at a reduced cost.

STATUS: This provision was removed late in the conference committee process during the last week of session and is considered dead.

Communicated the benefits of the Conservation Improvement Program (CIP): CEEM remained proactive this session in our work to educate lawmakers about the myriad of benefits from the CIP program.

STATUS: Nothing included in any bills that would negatively affect CIP program.

Residential Property Assessed Clean Energy (R-PACE): CEEM worked on this issue as a member of the R-PACE Consumer Protection Legislation Task Force last year and supported a bill that would have reinstated a functional R-PACE program in Minnesota with consumer protections intact. This bill, based on recent California legislation, faced opposition from an unusually powerful alliance, including bankers and consumer rights groups, who introduced their own bill. CEEM opposed this bill because it discourages private R-PACE providers from entering the Minnesota market.

STATUS: Passed in a stand alone bill, signed by the Governor on May 20..

Clean Energy Jobs Taskforce: This bill, as drafted, would have created a legislative task force to examine ways to grow Minnesota’s clean jobs workforce and make policy recommendations to the legislature.

STATUS: Bill drafted but not introduced.

Modification of Solar Electrician Licensing Change: This bill proposed a change to existing Minnesota law that caps the number of registered unlicensed electricians working under a Journeyman. The proposal would have raised the current 2:1 ratio to up to 5:1 for particular aspects of electrical work, helping solar companies meet the growing demands of solar projects while keeping costs low for consumers and training more new solar workers.

STATUS: Bill received a hearing in the Senate jobs committee. Not included in any final budget bill.

Emerald Ash Borer Removal Grant Program: This bill assisted in the collection and removal of ash trees infested with emerald ash borer in the Twin Cities which would be utilized by biomass energy producers.

STATUS: This provision was removed late in the conference committee process and is considered dead.

Defining a public utility: CEEM supported efforts to modify the definition of a public utility in Minnesota as a first step in market deregulation. This bill, brought forward by Representative Cal Bahr (R-East Bethel), received a hearing in the House Energy Committee as a conversation starter and expands opportunities for technological innovation, increased customer choice, private investment, and a more competitive energy marketplace in Minnesota.

STATUS: Bill did not pass out of committee and is considered dead.

Removal of Contiguous County Requirement: This bill would have allowed Xcel Energy customers to subscribe to a Community Solar Garden (CSG) located anywhere in Xcel Energy’s service territory rather than only one located in their county of residence or in a contiguous county.

STATUS: Added onto budget bill as an amendment. Stripped out in conference committee.

Xcel Energy Upgrades to Nuclear Facilities: A highly visible and contentious issue this session, this bill would have authorized an estimated $1.4 billion in pre-approved funds for Xcel Energy to update its nuclear facilities.

STATUS: Bill did not receive a final vote at the end of session and is considered dead.

STATUS: Bill not included in any final budget bill.

STATUS: Bill is included in the final budget bill. Governor could veto this bill.