Clean Energy at the Capitol : A Review of the 2019 Legislative Session

The 2019 Minnesota legislative session is officially a wrap. With a new governor and a slate of new legislators, change was in the air at the start of session. Several bold policy proposals aimed to facilitate ambitious clean energy growth in the state. CEEM and the clean energy industry asserted a strong position in important policy debates. In the end, however, significant divisions between the DFL-led House of Representatives and the Republican-led Senate meant fairly little policy was enacted.
Legislative Session Recap Minnesota Legislature Policy Updates

“New Faces, Big Ideas, the Power of the Business Voice, and Divisions at the Finish Line”

The 2019 Minnesota legislative session is officially a wrap. With a new governor and a slate of new legislators, change was in the air at the start of session. Several bold policy proposals aimed to facilitate ambitious clean energy growth in the state. CEEM and the clean energy industry asserted a strong position in important policy debates. In the end, however, significant divisions between the DFL-led House of Representatives and the Republican-led Senate meant fairly little policy was enacted.

The 2019 session was sure to be a session of change. Fall elections meant a lot of new faces and perspectives at the Capitol, indeed 29 percent of elected representatives (nearly one-in-three) were new members to the House of Representatives. 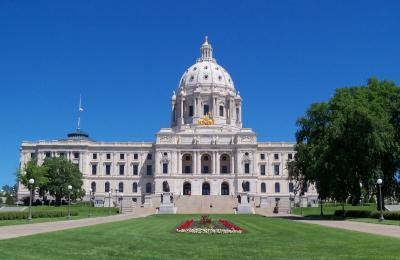 With Democrats taking control of the House in 2018 elections, new leadership and organization were in order. New Speaker of the House, Rep. Melissa Hortman (DFL-Brooklyn Park) came with a prior history of policy successes working with clean energy. The session included several new legislative committees, including the House Committee on Energy and Climate – marking the first time a committee included the word “climate” in its title. Chaired by Rep. Jean Wagenius (DFL-Minneapolis), this committee considered projected impacts of climate change on Minnesota and imagined policy solutions.

Over in the Senate, Sen. David Osmek (R-Mound) led the Senate Energy and Utilities Committee, and Sen. Erik Simonson (DFL-Duluth) served as the minority lead. The Senate set out to pass laws this year that had languished in the 2018 session, ultimately vetoed by then Governor Dayton.

In the Senate, Sen. David Senjem (R-Rochester) re-introduced a “Clean Energy First Act,” (CEF) which aimed to ensure electric utilities would meet resource needs using a clean energy resources requirement, but with a more measured approach and without a definitive timeline for carbon emissions reductions. Sen. Senjem noted in committee that in his career, “this is the most important bill I’ve ever introduced.” The Senate efforts on CEF remained in committees and were not recommended for negotiations with the House at the end of session. Sen. Osmek mentioned CEF could be discussed over the summer in the Legislative Energy Commission.

Policy debates showed differences across the chambers. The final proposals from the House and Senate went beyond big ideas. Significant divides were debated in both the House and Senate relative to community solar gardens (CSG), along with energy efficiency and conservation improvement program (CIP) designs. Senate positions threatened the viability of CSGs, and proposed significant weakening of CIP for the state’s municipal and cooperative utilities. Meanwhile, House approaches sought to expand both programs.

The Business Voice of Clean Energy Leads the Way 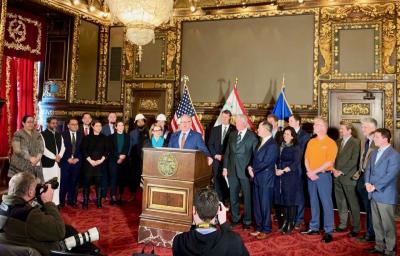 Throughout session, the voice of the clean energy industry was active, present, and effective. Beginning in January, CEEM along with colleagues from the Citizens Utility Board and GridLab briefed lawmakers on the current state of energy policy and clean energy in Minnesota. In February, more than 100 business leaders came to the Capitol and sat down with legislators for Clean Energy Business Day. Leadership in energy committees from both the House and Senate visited with participants and were able to listen to our clean energy business community. Governor Walz also delivered a Clean Energy Business Day proclamation in recognition of the contributions clean energy businesses are making to the state’s economy.

The Walz-Flanagan administration held two press conferences to tout Minnesota’s clean energy economy. Governor Walz surrounded himself with clean energy workers, joined by CEEM and leaders from member companies Blattner Energy and IPS Solar, to announce his “One Minnesota Path to Clean Energy.” Further, the Governor and Lieutenant Governor, and Commerce Commissioner Steve Kelley stood by CEEM and business leaders from All Energy Solar, Ever-Green Energy, and The Weidt Group, in supporting the release of the Clean Jobs Midwest Report, noting that clean energy is an economic engine for the state. The report launch was also supported by the presence of labor, the Minnesota Pollution Control Agency and Senate DFL 100% campaign bill authors.

Clean energy business continues to be a critical and powerful voice to elected officials. In legislative committees throughout the session, CEEM and our members provided important perspectives to educate lawmakers through testimony on potential legislation, submitting letters, calling or emailing their elected representatives, and communicating the importance of strong and stable policies through op-eds, social media and participating in press conferences. The message was clear that clean energy means business.

Elected officials noted that they heard from constituents about clean energy almost more than any other topic during the session. Businesses were active at critical points to remind lawmakers that clean energy business is here to stay. 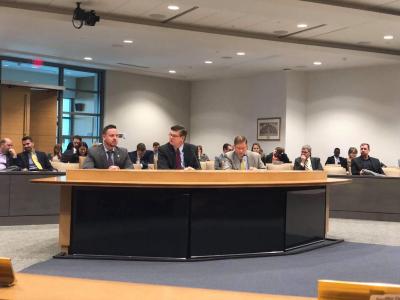 The legislative session closed with confusing legislative processes, partisan disagreements, and a lack of policy clarity related to clean energy. Leadership in state government went down to the wire to make last minute budget deals. Ultimately, a special session was called to finish the legislative work for the year.

There were clear divides in energy. Sen. Osmek, Chair of the Senate Energy and Utilities Committee, called the end results, “…an abomination. An absolute failure.” Rep. Long, Vice Chair of the House Energy and Climate Committee said, “It was definitely a disappointing outcome for the climate and for moving clean energy forward.” (More – MinnPost) The House and Senate publicly blamed one another further, citing opposing views on solving key policy issues.

While the lack of progress on moving big clean energy policy proposals is a missed opportunity, the inclusion of energy storage and improvements to Commercial Property Assessed Clean Energy (C-PACE) is exciting for Minnesota’s clean energy community. Executive Director Gregg Mast released the following statement about the end of session:

“Policy certainty is critical for moving our state in a positive direction. This session was an opportunity to act boldly, with intention, to ensure Minnesota increases our competitive advantage. Providing clear policy direction is essential to attract investments over the next decade and beyond. While it’s frustrating the legislature was unable to deliver on many of the big ideas and proposals discussed this session, important progress was made. Combining the policy advances in energy storage and expanding the proven financial power of C-PACE will dramatically expand clean energy investment across the state of Minnesota.”

While the clean energy community is disappointed in not being able to pass several bold policy proposals this session, we’ve seen how Minnesotans are increasingly demanding a change in energy policy. That’s very positive. It’s also positive to see the leadership and commitment of the Walz-Flanagan administration in strengthening our state’s clean energy economy. That means this issue won’t go away, and CEEM looks forward to driving further progress ahead of and during next legislative session.